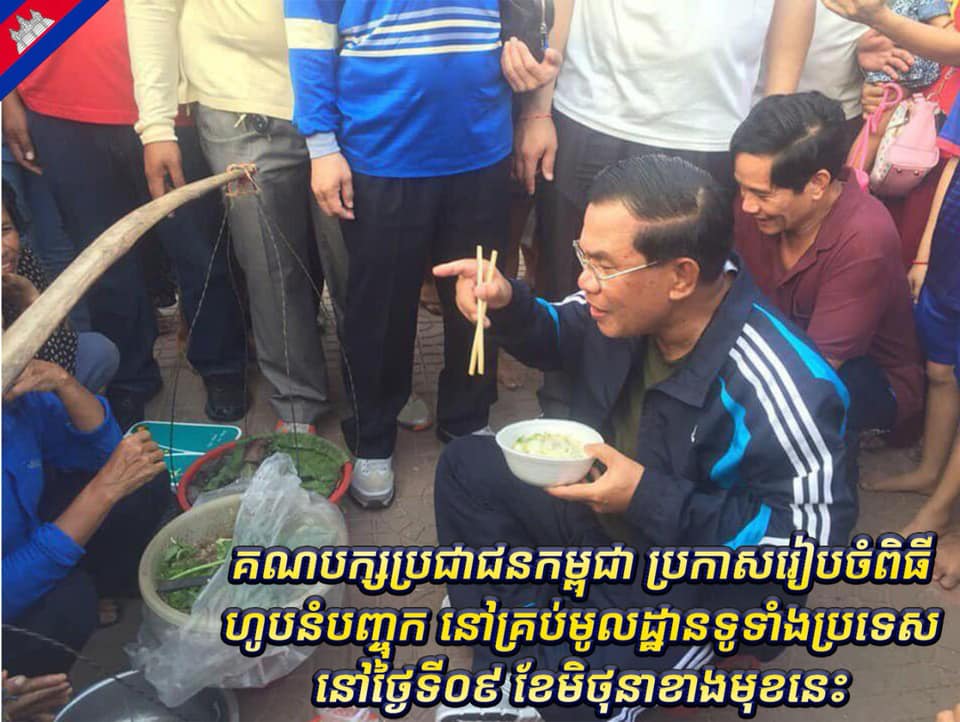 Num Banhchork or Khmer Noodle is one of Cambodia’s popular and traditional foods. It even became a favorite dish for a Chinese king, based on Cambodia’s popular folktale called Thun Chey. However, in the last couples of months, the former opposition CNRP has used it to serve their political purposes and made it a symbol of ‘rebellion’ against authority and a violation of the Supreme Court’s rule, dated 16 November 2017, which saw the dissolution of the former CNRP and a ban of 118 members of its permanent and central boards from political activities.

The oppositions have used “Khmer Noodle’s Campaign” to mobilize its former supporters and to take the opportunity to spread out its ‘rebellious’ and welcome plans for Sam Rainsy’s return – a cunning and provocative politician who has declared his ‘fake’ return in 2019. The campaign was amplified, especially in Battambang, by a former O’Cha commune head – an alleged mistress of former CNRP‘s senator Sau Chandeth, who fled the country to hide in Canada. The movement has been supported and encouraged by Sam Rainsy, Mu Sochua and Eng ChhayEang, as a part of their ‘color revolution’ to overthrow Cambodia’s legitimate government.

Nevertheless, to get rid of any suspicions, SPM Hun Sen has urged all Cambodian people, more specifically CPP’s supporters, to organize ‘Eating Khmer Noodle’ events in a bid to show off solidarity, unlike the proposed ‘Patriotic Khmer Noodle’ campaign run by Sam Rainsy-led oppositions, which aimed to rout the nation and the people, who are living in harmony, peace, and development. SPM Hun Sen claimed that his appeal was no by mean a ‘poison to cure poison,’ but was rather a ‘hammer to rout out problems.’ This is an ‘actual’ intervention to respond to the oppositions, led by ‘trivial’ politician Sam Rainsy and co, who attempted to carry out ‘color revolution’ plan, which was foiled and curbed because the government would not allow traitors Sam Rainsy, Mu Sokhua, Eng ChhayEang or Sau Chandeth, to take Cambodian people as hostages and to cause havoc and disorder and to harm Cambodian people’s harmony. For the sakes of their power struggle ambition, the traitor’s group dared to deceit Cambodian people and to push innocents to face off the laws, while they even dared to ‘clean off their shoes with Cambodian people’s blood.’

9th June will be ‘Eating Khmer Noodle’ event! It will be organized to strengthen national solidarity and to unfold Sam Rainsy and co’s tricks – the group that has never helped develop the country but instead tried every single way to hamper Cambodia and Cambodian people. Wish the date would represent a ‘heavy hammer’ that destroys traitor Sam Rainsy’s tricks and wish Cambodia to enjoy long-lasting peace, as long as the Khmer Noodle’s thread.