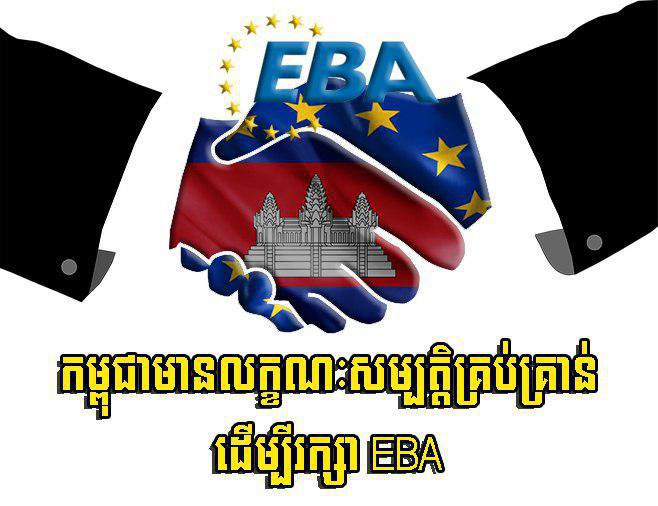 In the last couple of days, I have heard a lot of debates among Cambodian politicians, academicians and ordinary citizens on the withdrawal from Cambodia the European Union’s Everything But Arms quota. Some Cambodian people made it the topic to criticize and attack the Cambodian government led by Prime Minister Hun Sen – and seemed to push hard for the EU to lift the preferential EBA from Cambodia and frighten the Cambodian people, in what is seen to be a political exploitation. Some other people tried to explain and put the blame on Cambodia’s opposition as the ‘root cause’ that led to the potential EBA removal by the EU. A few others blamed and attacked the EU that suddenly threatened to suspend the preferential EBA from Cambodia, in what is believed to serve its political agenda.

Generally speaking, all problems have their ‘causes’, ‘effects’ and ‘solutions’. Like other problems, EBA issue cannot avoid being linked more or less with some superpowers’ political agenda. However, as a Cambodian with no affiliation with any political trends, I strongly believe that Cambodia meets the criterion to retain preferential EBA if we set aside our internal political agenda and see the EBA as an asset for the nation, workers and farmers and join hands in hands with each other to maintain it.

We should bear in mind that, to some extent, Cambodia has advantages from the EBA since it helps trade of Cambodia’s products in the EU market. Approximately 600 million US Dollars from the trade is injected into our national economy and household economy that benefit from the preferential EBA directly or indirectly.

Meanwhile, the EU has also advantages from the EBA because the EU citizens are able to purchase good products at a reasonable price because of that EBA. Hence, the suspension of EBA would mean the EU citizens would have to buy these same goods at a higher price. That’s the problem. Like what we all are aware of is the people from many EU countries are not so happy with their respective governments on many issues. A case in point is France where the yellow vest protestors have gone and continued to go down to the streets for many months because their government wanted to impose higher tax. And in some other countries, the situation is not far different because their citizens have been fed up with their lives due to high inflation which makes their livelihood even harder. This is not to mention Brexit which is plaguing the EU coupled with the effects of trade war.

In such a situation, the EU surely does not want to put more pressure and burden on their citizens. Hence, it is high probable that the EU would not suspend the preferential EBA.
Now, if we look at Cambodia, we have all criterion that could persuade and convince the EU not to suspend EBA.
Cambodia has made a huge improvement on labor rights. Working conditions in garment and shoes factories have been improved continuously and the minimum wage has been increased annually. Obviously, the 2019 minimum wage is US$182, a considerably high rate compared to many countries. Besides that, garment workers are entitled to other benefits, including the benefit from National Social Security Fund. Pregnant workers have been paid special attention by the government’s top leadership. The International Labor Organization (ILO) which has close collaboration with the government is a witness who could confirm the improvement in Cambodia’s working conditions. Moreover, Cambodia has a number of trade unions and an arbitrary council to solve labor disputes.

Cambodia has also paid great attention to solving land disputes. We can see the sharp decline in number of land dispute cases. Cambodia is safer and more peaceful compared to many countries in the region and in the world.

The Cambodian people could live happily and their living standards have been gradually improving while the country sees spectacular development in most of the important sectors. This is a clear indication that Cambodia has no serious human right abuses except for a very few specific cases. Better working conditions, improvement of living standards and increase in workers’ minimum wage are all important parts of the respect of human rights.
Actually, the EU always cites the case of former CNRP dissolution as the ‘cause’ of decline in Cambodia’s democracy. However, peacefulness, vibrant economic activities, no social issue and no unrest are all a proven sign that the dissolution is a separate case which does not affect the country’s general process and the living conditions of our people in the country.

The amendment of Political Party Law which paved the way for 118 former politicians – who were imposed by a 5-year ban from politics – to rehabilitate its political life, is another good sign of return of Cambodia’s normal political life. Likewise, the creation of Supreme Council for Consultation or the Government Forum with Civil society and the Government-Private Sector Forum constitute another positive sign of democratic improvement in Cambodia.

To sum up, Cambodia has all favorable conditions for all types of economy, investment or trade activities. Cambodia has achieved a steady economic growth and has surpassed the least developing countries with low income and is in the process of becoming a Lower Middle Income Country.

The Phnom Penh Government has set goal to make Cambodia a High Middle Income Country by 2030 and a High Income Country by 2050. The nation’s education sector has been improved while tourism is flourishing. These are evidences indicating that Cambodia has been developing in all fronts. So, What would be the reasons for EU to suspend the preferential EBA before deadline? I see no reason at all. But all these require the government to work more actively and wisely in their negotiations with the EU for the upcoming one year.

Based on this rational, I personally come up with the conclusion that the preferential EBA would still be provided to Cambodia until the country’s economy reaches a certain developmental level that exceeds the EBA requirements. Hence, what are the reasons for Khmer to duel Khmer over EBA? Instead, all Khmer people should work hand in hand with each other to maintain EBA. I have given some suggestions to my friends who are civil servants that what the Phnom Penh government should do is to set up a task force and should be in better and well-prepared position to talk and negotiate with the EU.

At the same time, the opposition group which is frightening the Cambodian people over EBA should stop such activities because the chance of EBA being removed from Cambodia is slim. If the opposition press harder over it and at last, the EU decides to continue providing EBA to Cambodia, they will surely lose their popularity among the public and supporters. As a Cambodian, I want to see the Cambodian politicians knowing how to separate between national and political interests meaning that they should sit together and settle their differences internally between Khmer and Khmer. Please do not use the national interest as a hostage for political gain because it will not in any way benefit the nation. Again, I am still optimistic that the preferential EBA would still be available to Cambodia because the country meets all criterion to maintain it.

Consequently, the Cambodian people should be calm, stop arguing with each other and should not be anxious about it. What we should do is to work together to maintain it. «Preferential EBA is not a Dead and Life Condition for Cambodia but it is only a Value-added that we could benefit from it».

By: Professor in Social Studies and Anthropology