You Were US Representatives, Not Cambodian Ones! 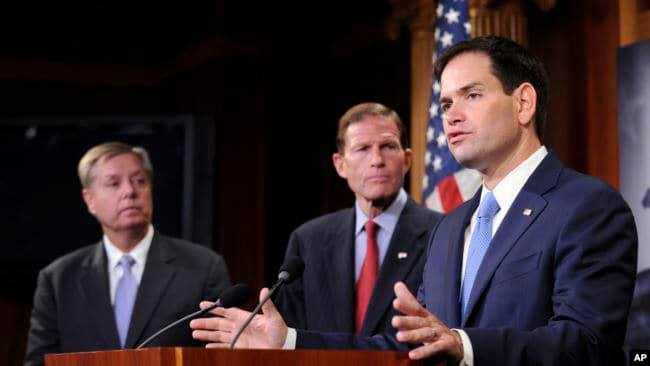 You Were US Representatives, Not Cambodian Ones!

It’s ridiculous that a group of three US senators who had claimed to have loved Cambodia more than Cambodian people have insisted to enact an ill-intended, political-motivated act, which was applauded and echoed by a group of self-exiled oppositions and some “notorious” foreign media, in a bid to force Cambodia to abide by, but they were wrong since they were American representatives, not Cambodian ones, and their efforts were meaningless for Cambodia as a sovereign and independent state! They should use their time to fulfill the demand of their supporters, who teased them that “they would be better off focusing on American interests and restoring their democracy and human rights first” than employing its ill-purposed policy to interfere into Cambodia‘s internal affairs. Cambodia is not part of their federal states, and they were not Cambodia’s patron, who they can control the country’s move, like they have done with the group of the oppositions – with a purpose to ultimately claim their geo-political position.

The group of three senators, including Republicans Lindsey Graham and Marco Rubio and Democrat Dick Durbin, have never landed in Cambodia. Instead, they just spent their time reading opposition’s reports from their offices and enact an act against Cambodia, citing to restore Cambodia’s democracy and human rights – claimed to have declined – and to fend off increasing Chinese influences. It was an accuse, long used by the West against Cambodia. The US supported Sam Sary to overthrow former King Norodom Sihanouk in late 1960s and later on 18 March 1970, citing human rights and democracy, they again supported General Lon Nol and Prince Serey Matak, pushing Cambodia into wars and genocide. As a result, Cambodia suffered the most heartbreak tragedy in human history.

Recently, some US staff whose notorious plan was to target Cambodia for the sake their performance and their country’s geo-political position has tried every single way to persecute Cambodia and harm Cambodian people’s well-being and development. They have proposed a host of measures, including the demands to unconditionally and immediately free members of one outlawed political party and civil society, and to reverse the 2017 and 2019 amendments on Law on Political Party. CARI Act also proposed to freeze Cambodian officials’ properties in the US and encouraged the US government to decide against all loans to Cambodia.
Was this how they wanted Cambodia to restore democracy and human rights they claimed to have declined? These were the languages popularly used by a group of foreign puppets and traitors, such Sam Rainsy and Kem Sokha – they even had claimed that the democracy and human rights in Cambodia was in critical condition or even dead. It’s unbelievable that senators from a country touted itself as the ‘Father of Democracy’ acted partially and were revengeful against Cambodia and its people, based merely on the incitement of the outlawed oppositions. However, it was simple that the boss protected its subordinates, closing their eyes and ears on the violations of laws and treason cases of the former oppositions who ushered the plan to topple legitimate government by mean of ‘color revolution.’ Kem Sokha had confessed himself and claimed that the ‘color revolution’ attempt had been backed by the US, taking the models employed successfully in the former Yugoslavia and Serbia that saw legitimate government overthrown and ‘change of leaderships’ undemocratically. Now, the three senators demanded to free and lift all lawsuits against Kem Sokha, who they had claimed to be under house arrest, and all of his co, who were self deported, while all of their cases were being taken by courts. These activities ‘looked down’ on Cambodia’s court and violated the nation’s sovereignty.

If the US unfolded a group of traitors, would you set them free without any actions? The US had taken several measures against alleged Russian interferences into their election and the recent Austria’s Vice-Chancellor scandal – which footage revealed he and his co promised to open up Austria for Russian oligarchs if they helped them win their election – leading to a string of resignations and full-scale probe. As a sovereign and independent state, Cambodia must take all necessary legal measures against the group of traitors, including Sam Rainsy, Kem Sokha and their co. Cambodia has ‘zero’ tolerance towards a handful group of people who served foreigners’ interests, harmed Cambodian people’s peace and interests, and took them as hostages. Cambodia’s democracy is striving with the nation sticking with rules of laws and principles of human rights as stated in the UN’s Human Rights Declaration. It’s the oppositions led by Sam Rainsy and Kem Sokha who trapped by the laws as they conspired with foreigners to serve their interests and to harm own nation. Like in the US or any countries in the world, Cambodia must take actions against perpetrators and those who didn’t abide by the court’s rules, and no one should interpret how Cambodia takes measures against them as a sovereign state as a persecution of or violation on the oppositions. If they do, they do it just for the sake of their group’s political advantages. Cambodia reserves all rights by law to take actions against the traitors and the group who shamelessly begged foreign counterparts not to assist, invest and purchase Cambodia’s products, as well as ‘bowing their heads’ to execute ‘color revolution’ plan to harm their own country. Their activities shouldn’t be interpreted as freedom of expressions and civic and political rights, too. Clearer evidence that revealed how Sam Rainsy-led group’s attempted to harm their own nation and ‘bow heads’ to foreigners was made by Pon Savry, General Secretary of the former CNRP, recently opened overseas following Rainsy’s party coup, who claimed in VOA that ‘…the proposed act would be extensive and it is part of the US’s major action plans to fulfill US objectives…’ In short, what the group of senators – who have never visited Cambodia and understood Cambodia’s situation – have done was clearly to serve the interests of the US’s policy.

Was Cambodia under China’s influence? To add spices to their statement and to attract interests from Donald Trump’s administration amid US-China trade war, the senator group has framed Cambodia that the country was under China’s influence. Cambodia is a sovereign and independent state and is under the UN umbrella, like the US, and Article 23 of the UN Charter states clearly that “no one state shall interfere, both directly or indirectly, for any reasons, into another state’s affairs.” Cambodia’s sovereignty shall be fully respected the same way that Cambodia is respecting other nations’ sovereignty as an equal state and equal right. Such non interference principle was also inscribed in Paris Peace Accord, which the US – one of the signatories – shall observe, and all its principles were integrated into Cambodia’s Constitution. US senators should not be fooled by the oppositions. Cambodia and China are in full scale cooperation and Chinese investments are being beneficial to Cambodia, especially their construction and other investments. Cambodia and China need to cooperate to protect their investments as a host country and investment source. China, often expressed by its top leaders, promised to observe Cambodia’s sovereignty and independence. Why were these interpreted as Chinese influence? The senator group should listen to Donald Trump’s speech that states clearly that any leaders, regardless of their country’s power rank, must put the interests of their country first, like Donald Trump always repeated “America First.

” If the US or those senators feel envious with China for they have huge investors in Cambodia, they should “enter the race” with China by investing and assisting in building infrastructures in Cambodia the same way as China has done with Cambodia as a true friend. However, the US might not be able to do that since they always put their first and has never bothered about international laws. The US has never bothered about human rights and democracy, but instead cared only about how they could control or put a country as its subordinate to serve its geo-political position. The US could reflect itself from the Vietnam War and wars in The Middle-east. What were it’s real intention? For a small group of foreigners’ slaves, like Sam Rainsy and co, were like a ‘banana leaf’; they will be disposed when they are useless. The case of General Lon Nol and Prince Sisowath Serey Matak being dumped was a good example for that.

Hence, not for purpose of the US’s geo-political position, the three US senators brought Cambodia into dilemma. They should stop using the group of Cambodian slaves, like Sam Rainsy, to harm Cambodia society because Cambodian people do not want their forceful advices or pressures. Cambodia and its people want to live in peace like they are in nowadays and will continue to develop under a mojo of ‘internal reforms and expansions of foreign friendships in the spirit of independence.’ Cambodia will never ever trade its sovereignty and independence with any assistances and preferential tax exemption schemes.