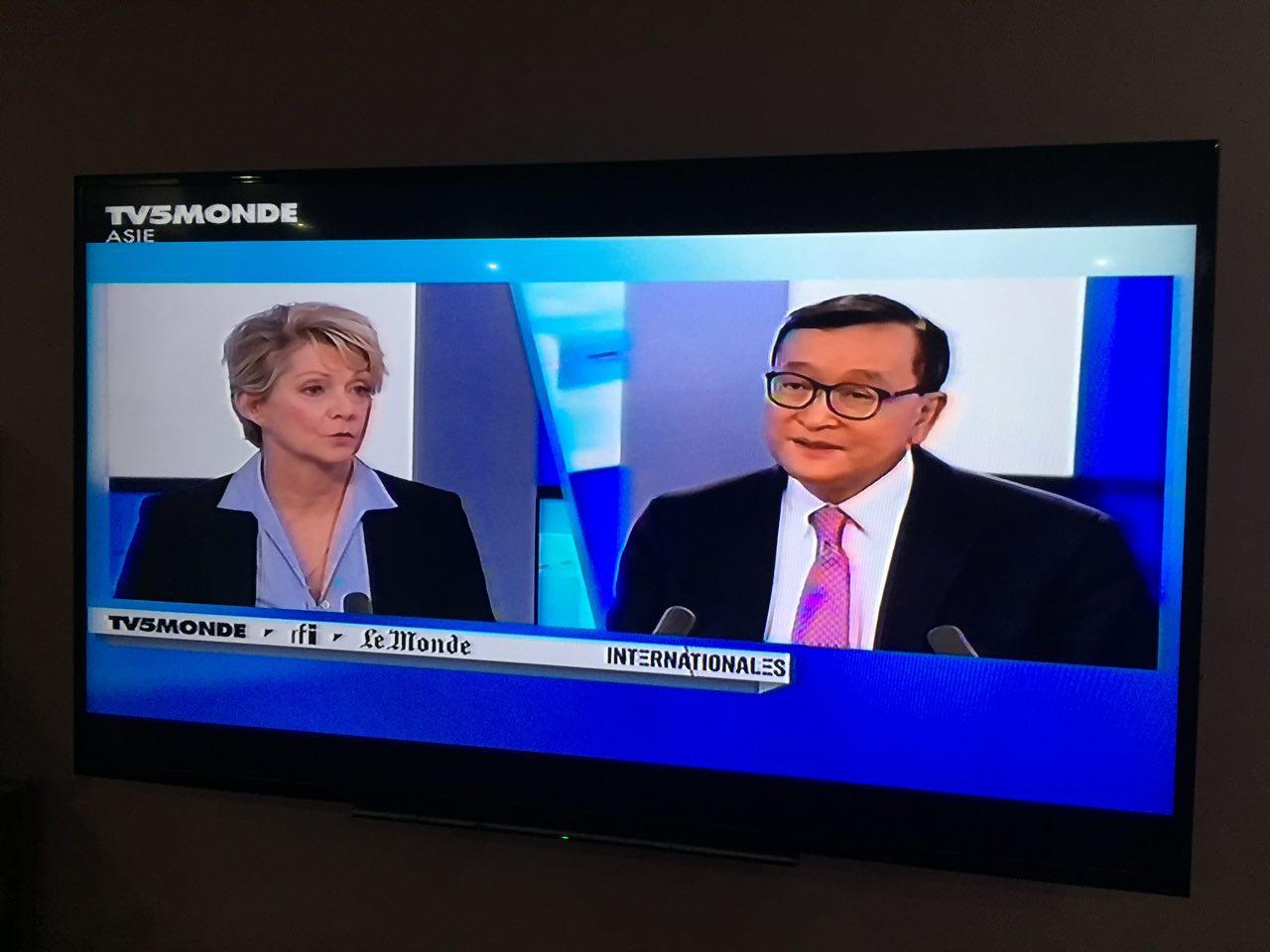 Many questions were asked by the French journalists that caused this convict Sam Rainsy in a very difficult and delicate situation to give answers. All of his excuses are meaningless for the French journalists and the French people in general since his answers are seen as a pretext to groundlessly launch the attack on Prime Minister Hun Sen.

The French journalists’ questions are seen as an annoyance and unmasked the convict Sam Rainsy, such as: After the dissolution of CNRP, Cambodian protests were not seen against the court ruling. This meant that the Cambodian people were happy with the CNRP’s dissolution or in other words they stop supporting the opposition party?

The next question is the CNRP’s dissolution was not the focus of the international community. Why? This point, the convict Sam Rainsy not only could not deny but also acknowledged that the world is currently facing much bigger problems than the Cambodian issue, such as Iran, Afghanistan and North Korea issues…sic.

Virtually, the French journalist of Le Monde posed such question: “Sam Rainsy, you seem to be protruding to understand. During the past electoral campaign, you accused the Phnom Penh Government of serving Vietnam or sell the head to youn. Then, you accused the same Phnom Penh Government of serving China or sell the head to China. I am sorry to say that this is not right as you know China and Vietnam are not in good term. What did you exactly mean? When the convict Sam Rainsy was unable to finish his answer, another question comes: “ you accused the Government of selling Angkor Watt to Vietnam, accused the Vietnamese of stealing jobs, land, and Cambodia’s forest. Isn’t your language not discriminating against an ethnic or provoke a violence against an ethnic?  When the convict Sam Rainsy tried to paint Mr. Prime Minister of leaning towards China, the French journalists had another question “what do you do because a small country in the region cannot tilt against any superpower’s influence?

The 3 French journalists took turn to ask Sam Rainsy without giving this convict the moment to speak freely as he used to do in Radio Free Asia. Another question is: “Sam Rainsy, the current Government leads the country in balancing with its neighbors; neither border wars with Thailand nor with Vietnam; isn’t it right? When the convict Sam Rainsy was troubling in giving the answer, another additional question comes: “ or because of Cambodia is in peace, no war, that leads the international community to not speak much about the Cambodian problem? Isn’t it?

The convict Sam Rainsy was also asked about his run away politics. The question is: “ Sam Rainsy, you always admire Ms. Aung San Suu Kyi of her struggle to stay in prison or being under house arrest for too long. If you admire her, why don’t you follow her struggle but chose to run away to stay in foreign country?”

There was also question on Khmer Rouge regime. As his habit, the convict Sam Rainsy always  links Prime Minister Hun Sen with the Khmer Rouge. But he was then asked by the French Journalists: …. that wasn’t Prime Minister Hun Sen escaped to Vietnam to save the country? While the convict Sam Rainsy tried to divert the question without firm ground by putting the blame on those who saved the country from the Khmer Rouge rule, another question comes: “ you talked about sentencing more khmer rouge leaders but this affects the principle of national reconciliation?” the convict Sam Rainsy becomes more and more stuck in his baseless answer. The question that was asked before had not yet been fully answered, the next question comes: “your language seems to cause the discrimination between people and former khmer rouge cadres. Don’t you know that today, people are living peacefully with the former khmer rouge leaders?”

It is worthy to note that these tracking down questions shown that this French TV had really unmasked Sam Rainsy’s true face for the French public to see clearly the true nature of this insane politician since in France, the French people are highly educated and they can’t always trust the convict Sam Rainsy’s words. In a nutshell, the pale face, the allegations coupled with the baseless answers of convict Sam Rainsy costs this former opposition leader to extremely lose face in the eyes of the international community, particularly vis-à-vis the French people and Cambodians living in France. Although he tried to attack, blame and accuse the Government of Prime Minister Hun Sen, but for the French people, these answers not only reflect the convict Sam Rainsy’s shallow politics, but also his political party deserves for dissolution and consequently, the foreign community could not come for his rescue.

By the same token, the way the really independent journalists pose such questions are indeed unlike the unprofessional journalist Chun Chanbotr of Radio Free Asia who is self-proclaimed as an independent journalist but in fact performs as a stalwart political player as always proven by his prepared questions to open ways for the convict Sam Rainsy to speak at his own will.  And all these facts are a clear testimony to prove that this opposition party which lacks the logics both in its statement and performance be fully worthy of dissolution. The same is to be said for the office closure in Phnom Penh of this Radio Free Asia which is serving the foreign interests that had packed their bags and left Cambodia to return to its own country due to the firm enforcement of the rule of law in Cambodia.